skip to main | skip to sidebar

Back in Perth- whats been happening??

So since being back in Perth, the group is still working on their connection with Africa & their own development from the trip. The group has continued to raise money for the Kibera youth group to run further camps and the group has also been involved in exploring what the trip meant to them & communicating that to the wider public. The participants of the group will in time be sharing stories about what has occurred since they have been back & we each look forwarded to the continued relationship with East Africa & the possibility of one day returning..

Kellie
Posted by African Immersion Group at 12:11 AM No comments: 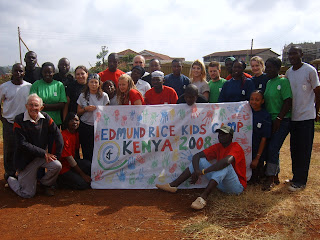 The leaders of the Eddie Rice Camp, Kibera, Kenya. The camp was an amazing experienec for all-thanks to each of the people in this photo-each should be extremly proud of their efforts and excited about the future of these camps for the young people of Kibera and its surrounds.

The group about to go on safari in Tanzania.A great day was had by all and everyone learnt lots about the large animals that inhabit Africa. 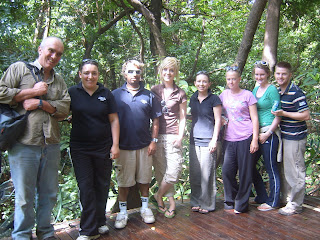 Posted by African Immersion Group at 12:06 AM No comments: 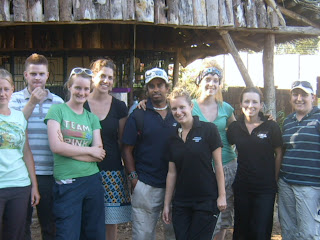 Our outing to food water shelter to visit Kelsy-this is our group with Kelsy @ the volunteer villagee.
Posted by African Immersion Group at 11:59 PM No comments:

Just letting you know that everybody got off to the airport safely this morning. It was an early wake up call with the bus to the airport arriving at 4am. So cold and sleeping, everybody pilled downstairs with their suitcases to walk out the bungalow door for the last time. Kellie, Sally and I rolled out of bed to say goodbye. We leave for Egypt this afternoon. So Merry Christmas and Happy New Year to everyone and your loved ones should be home soon.

Dani
Posted by African Immersion Group at 10:37 PM No comments:

i sit here in the internet cafe, filled with a huge sense of pride, gratitude and achievement. Friday afternoon concluded the first ever Edmund Rice Camp for Kids in Kenya, and it couldn't have been more of a success. As a group, we are immensely proud of how the camp went and we are able to see our impact on the fantastic camp programme, the dedicated and wonderful East African youth leaders, and most importantly on the kids themselves.

The roles we played in this camp were varied and began long before this previous week. After Kel attended the Karibu Conference last year, she was inspired to bring the awesome work Edmund Rice Camps for Kids WA to Kibera, a place of intense poverty. Over the course of 2008, Kel shared her vision with the group as we prepared to run this project as part of our immersion. In perth, we all fundraised like mad to raise the money to fund this camp (and the one in Tanzania in the first week) and looking back at what a success it was we want to thank our friends and family again for their support. We have been able to witness first hand the result of your generosity through support and donations.

Once in Africa, we also met with the group of East African youth volunteers several times over the first two weeks for leader training, a sharing of games and songs, brainstorming and constructing the camp programme, discussing expectations and aims for the camp, and also an exchange of our cultures in order to maximise all volunteers' interactions with the kids. This part of the project was equally as important as the camp itself as we were able to impart our ideas and experience onto the East African leaders in order to prepare them for the potential next Kibera camp which they will run by themselves.

On the camp, we were given different leadership roles to best facilitate both the smooth execution of the programme and also the East African's development of leadership. we tried at all times to give the best support to the African leaders and let them take ownership of the camp, because the plan is that they will continue with this initiative. after working with them for the week, i am left with every faith and confidence that they will keep the camps going to the same level of success. the East African leaders were an absolute inspiration. most of them live in the Kibera slum themselves, but take pride in their tiny houses and are so welcoming and hospitable. most are unemployed and without an income so they were giving up time that would've been spent looking for work to be on camp and playing with the kids. they are so open about their life stories, most shaken with unimaginable tragedy and misfortune, and despite it all are filled with positivity and passion and a thirst to achieve ultimate goodness.they have so little and give so much. i am moved and inspired by their work. we have also been lucky enough to call these amazing people our friends as they have welcomed us into their beautiful country.

the camp itself was an incredible experience. the first thing we noticed was the difference in the kids' behaviour than that of the Tanzania camp. it seemed that the Tanzanian children were the gentle country folk who were so excited by our mere company. the kids in Kibera however, were like the city kids from the ghetto. it was going to take more than a little smile to create a connection with these kids. after the first day, however, the kids had warmed to the bunch of wazungus (white people) and we realised that a tough exterior was purely, well, a tough exterior.

something that was really interesting throughout the whole camp was the notion of communication between us and the kids. they knew minimal english, and with only the basics of kiswahili mastered we thought it was going to be a lot harder than it was. turns out, every kid in every country speaks the language of "play" and we were able to bond with the kids in that way. whether it be through singing songs, playing the jembe drum, making a friendship bracelet, playing chasey, sharing a meal, dancing together or kicking a ball, we found all kids have the same desire for fun and affection, and we were able to make connections that way.
there was one very small girl on camp who was a particular favourite of our group who we individually shared so much with and felt very fond of. During our final debrief and reflection on sunday, we all collectively realised that this small girl hadn't spoken a single word to any of us. it hadn't even occurred to me that i hadn't had a conversation with this girl because i felt like i knew her, and that i had a connection with her beyond a smile and a wave. i guess there is so much more to communication and endearment than words.

the camp programme involved sports activities, kite-making, paper-plane competitions, story-telling, games with hoops and balls and skipping ropes, poetry, warm-fuzzy writing, and singing and dancing. the best part about the programme was the way every kid gave their complete energy and attention to every activity. they were so enthusiastic and thrilled by every activity that was run. something that we've noticed Kenyans always talking about it "energy" and "being energised" as part of being alive, and the kids were constantly encouraged to be full of energy. and they always were!

by the end of camp, we all realised that kids are the same no matter where you are. once a few flimsy barriers are broken down then the friendship, lessons and connections that can be shared with a child is not affected by nationality, age, race, culture, gender or class. it didn't matter that i was a big white female "grown-up" and he was a tiny black african boy, because once all those physical labels are taken away, all that is left are two simple people who pretty much just want to laugh and play.


Sally
Posted by African Immersion Group at 10:26 PM No comments:

Once camp was over and the end of the immersion was upon us, we had our celebration dinner at Carnivore Restaurant on Saturday night. It is a highly popular place, the venue is enormous, the building and decor is Safari style. The waiters dressed in in their matching Safari outfits constantly come to the table and slice the meat straight off huge metal skewers with a machete on to your hot plate. On the menu was chicken liver, chicken gizzards, ostrich meat balls, the list goes on... it is possible on some occasions to be offered elephant, giraffe and zebra... so I was told. I was amazed, fascinated and really impressed with the place... even though I am vegetarian. There are alternatives for us leaf eaters... however as my motto goes 'When in Africa...' inspired me to taste the tiniest sample of crocodile which tasted like fish. So if you are planning on visiting Kenya, I would highly recommend dropping in to Carnivore!

Kellee
Posted by African Immersion Group at 10:20 PM No comments: